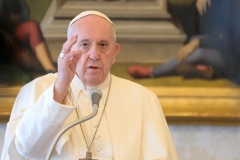 One of Pope Francis' personal charity offices wired money to a parish southwest of Rome to help transgender prostitutes who had lost customers because of the coronavirus pandemic, reported several media outlets. The prostitutes apparently lacked funds to buy food and other necessities.

As reported in The New York Post, the prostitutes contacted a local parish priest in the beach town of Torvaianica. The priest, Father Andrea Conocchia, had few funds so he contacted the papal almoner, Polish Cardinal Konrad Krajewski. (Almoner means "distributor of alms.")

Krajewski is known as the "Pope's Robin Hood," as he spends his time distributing charitable funds to the poor.   He "said the transsexuals most likely were undocumented, making it difficult for them to seek help from Italian state welfare offices," reported The Post.

“Everything is closed," said the cardinal. "They don’t have any resources. They went to the pastor. They could not have gone to a politician or a parliamentarian. And the pastor came to us."

“They are really in difficulty because sometimes their passports were taken away by the mafia pimps who control them,” said Krajewski. “We follow the gospel.”

Fr. Andrea Conocchia told the Catholic publication Crux, "They are prostitutes, there are no other possibilities of life for them, at least right now, unfortunately. And right now, they obviously don’t have the ability to go out on the street,” he said. He added that “most were trans.”

As Fr. Conocchia told Crux, “At one point one of them interrupted, saying, ‘no, don’t write anymore [to the Vatican], because I am ashamed of saying these things to the Holy Father! I’ve had a life like this, and I am ashamed…’ And the other said, ‘no, let’s ask for rent, for the gas bill, for help,’ so they did it like this."

“The person is always a person, then comes the person’s life … first comes the noun, then the adjective,” said Fr. Conocchia.

"Since Pope Francis named [Krajewski] to the Vatican charity post in 2013, he became known for dressing down into simple layman’s clothes at night and bringing food to the city’s homeless in a white van," said The Post.   "He has also opened shelters near the Vatican where the homeless can wash, get haircuts, and receive medical care."