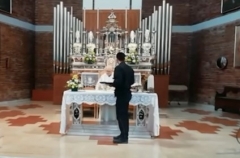 A police officer in northern Italy interrupted a Catholic Mass on April 19 and tried to stop the ceremony, but the priest rebuffed his efforts and a subsequent phone call from the mayor. In the end, the officer fined the priest $735.00 (680 euros) and a reported 19 parishioners $300.00 (280 euros) each, for apparently violating COVID-19 quarantine rules.

As reported by Martin Burger with LifeSiteNews.com, Fr. Don Lino Viola was offering the Mass at a church in the northern Italian village of Soncino, which is close to Milan. As Fr. Viola was saying the prayers in preparation for Holy Communion, a police officer interrupted him and told him he needed to stop what he was doing.

Fr. Viola exchanged a few words with the officer and continued with his prayers. Shortly thereafter, the policeman returned with a cell phone and told the priest that the mayor was on the phone.  Fr. Viola, in the middle of the most important part of the Mass, did not take the phone call.

As Burger reported, there were about 19 people in the church and they were separated, with about four meters (approximately 12 feet) of space between each person. Everyone was wearing a mask except for the priest.

“They were a family who at that Mass commemorated some people who had died, plus a lady who had lost a relative to coronavirus two days earlier," said Fr. Viola.  "It wasn’t human to send them out."

Fr. Viola told the parishioners not to pay the fines issued by the police. He said,  “if anything, the parish will take care of it. I’m convinced that I haven’t created an assembly.”

In a March 29 interview about how COVID-19 is affecting the faithful, and which mentions another police case, Archbishop Carlo Maria Vigano, the former Vatican ambassador to the United States, said, “It must also be clear, though, especially in a country like Italy which signed a Concordat with the Church in 1929, that the ecclesiastical authorities have sole rights over places of worship."

In other words, there may be no legal standing for the police to interfere with religious gatherings or with the clergy.

However, "the authority of bishops, given directly to them by God, melts away like snow and shows how cowardly they all are," said Vigano. "This might lead to even worse abuses in the future, if it is not corrected now. Let me take this opportunity to ask for a forthright condemnation of this unacceptable meddling by government forces in affairs which are the direct responsibility of the Church Authorities.”