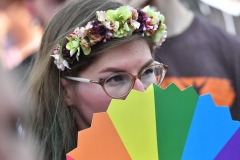 Legislation making its way through the Hungarian Parliament and expected to become law would legally define a person's sex or gender as "sex at birth," meaning later in life a person could not legally change their gender. The proposal has angered many European Union leaders and LGBT activists.

As explained by Human Rights Watch, the bill would amend the Registry Act to "include a clarification regarding the word 'nem,' which in Hungarian can mean both 'sex' and 'gender,' to specifically refer to the sex at birth ('szuletesi nem') as 'biological sex based on primary sex characteristics and chromosomes.'"

Also, once the "sex at birth" is recorded, it cannot be changed.

Prime Minister “Viktor Orban is using the Covid-19 health crisis as cover to push through discriminatory legislation that will be devastating to the lives of transgender people in Hungary,” Graeme Reid, the director of LGBT rights at Human Rights Watch, told The Independent.

“It is typical of the autocrats playbook to consolidate power by attacking the most marginalised," said Reid. "The EU should act.”

A letter from 60 European leaders to the Hungarian government says the legislation will lead “to increased discrimination, harassment and violence, particularly because the production or presentation of public documents might oblige them to disclose their gender identity recurrently.”

“Its adoption will further restrict fundamental rights and civil liberties of transgender and intersex persons in Hungary,” reads the letter, as reported by LifeSiteNews in Hungary.

The pro-homosexual Pink News said that Orban's government is "brazenly homophobic" and had already banned gender studies from universities.

A transgender "woman," Amanda Malovics, said that Orbn and his Fidesz Party "believe being transgender is -- along with the whole LGBT+ community -- something that goes against the Hungarian Christian society and breaks fundamental values (such as children can have only heterosexual, cisgender parents)."

Hungary's Parliament is expected to vote on the legislation in early May.