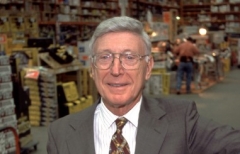 While discussing the reopening of the U.S. economy in light of COVID-19, Home Depot co-founder Bernie Marcus said the liberal media have "done a wonderful job in frightening America."

He added that many of the people making the top decisions -- "bureaucrats, government employees" -- get paid no matter what happens. They always have a paycheck coming in.

But the "poor guy out there who works for a living, who gets paid hourly, he's got a struggle," said Marcus, which is far different than that of the politicians.

On FNC's Ingraham Angle, May 18, host Laura Ingraham asked Marcus, "Bernie, as a member of the White House Reopening Task Force, how do you combat some of the media narratives that are keeping people afraid, so afraid of leaving their home still?"

Marcus said, "Well, I think the media has done a wonderful job in frightening America. And the truth of the matter is, what [Florida] Governor DeSantis did here, and what Governor Kemp did in Georgia, is a perfect example of thinking, of understanding that people needed to get back, needed to get out of the house, needed to start their businesses again, needed to go to work again."

"But there are bureaucrats all over the country," said Marcus, who as a Home Depot co-founder created and sustained tens of thousands of U.S. jobs over decades. "We still have it in the blue states, as you know, that are still closed-- and God knows when they will open. And those people up there, they are struggling and its desperation time for many of them."

When asked about the many states and cities that rely heavily on summer tourism but are not seeing the reservations come in, Marcus said, "Remember this: that a lot of these rules are made by plutocrats, bureaucrats, government employees, people who get paid no matter what happens."

"But the poor guy out there who works for a living, who gets paid hourly, he's got a struggle," said Marcus.  "And he -- and the money doesn't come in. If a governor decides he wants to close the state, well, he still gets paid. His family still eats."

"But the people that work for him, I'm sorry to tell you, don't have the same situation," he said. "It's pretty sad."