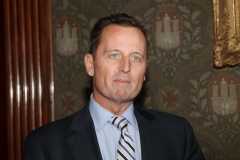 Richard Grenell, the former Acting Director of National Intelligence, said in an interview with Mark Levin on Wednesday that when looking at the Russia collusion hoax and related anti-Trump actions taken by the FBI and other agencies under President Obama, "there is no possible way" this "wasn’t known inside the White House."

On the May 27 nationally syndicated Mark Levin Show, host Mark Levin asked Grenell, “My question to you is this: I’ve read the declassified information. It’s very significant. It goes to very high levels, some of the information we’re talking about. Is it possible, really, that top officials at the White House – you have top officials at the White House participating in some of this – is it really possible that a president of the United States wouldn’t have some sense of what’s taking place in his administration when you have an FBI, the CIA, an NSA, when you have newspaper articles about the FISA court, leaks going – is it really possible, Rick Grenell, with all your experience and knowledge, that a president wouldn’t know at least the general parameters of what’s taking place?”

Grenell, who recently stepped down as Acting Director of National Intelligence, said, “I try to just look at the facts, especially in this job, and tried here to do just that – what are the facts and what are the points? This is a very good question that we have to get to the bottom of."

"But make no mistake," said Grenell, "what I would say is, what happened in terms of general parameters, there is no possible way – when you look at this – that it wasn’t known inside the White House."

"Multiple layers of people knew about this over time and were completely aware," he said.  "Now, the question is going to be, was this directed or was this, kind of, information sharing? That’s what we’ve got to get to the bottom of.”

Levin then commented, “And in this we’re talking about a multitude of things that come under this whole general nomenclature 'Russia collusion,' whether it’s unmasking, whether it’s the FISA court, whether it’s people put into the Trump campaign."

Earlier in the interview, Grenell said that early in the Russia collusion investigation there were several intelligence officials who raised "red flags" but they were silenced or their words were classified away.

“We have to improve the reputation of the current process," said Grenell.  "What happened at the FBI, what happened at some other agencies, is an outrage and we have to fix it."