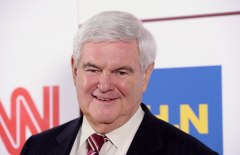 While discussing the ever-worsening crisis at the U.S.-Mexico border and the massive influx of illegal aliens into the United States under the Biden administration, former Speaker of the House Newt Gingrich said that Vice President Kamala Harris was appointed to oversee the problem because "they knew she would do nothing."

"I can think of nobody who is better qualified to do this," President Biden said of Harris, back on March 24.

In an April 12 interview on Fox & Friends, Gingrich explained that the Biden administration, and Democrats in general, want to flood the country with as many illegal immigrants as possible because the majority of them eventually will turn into votes for Democrats.

“If you look at a piece of history, sometimes the obvious is accurate," said Gingrich.  "They wanted Harris to be in charge of the border because they knew she wouldn’t do anything."

"So, from their perspective, the next 10 or 15,000 people [coming in] are good because it further increases the number of illegal immigrants in the United States, which is what they want," said Gingrich.

Their plan is working, he added. “What if your goal was to have the maximum number of illegal people in the United States? How would you do better than Biden?” he said.

"That's why they appointed Kamala Harris," said Gingrich, "because they knew she would do nothing."