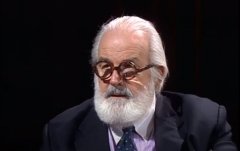 Van Gordon Sauter, a former president of CBS News, said much of the dominant media are "decidedly liberal" and that "much of journalism" is now the "voice of the 'resistance,' dedicated to ousting the president" from office.

In a May 25 commentary in The Wall Street Journal, Sauter recalled that former Reagan foreign policy adviser Jeane Kirkpatrick warned him 35 years ago that it was "too late" to try to restore some fairness and balance to the liberal news media.

Today, the "highly influential daily newspapers in New York, Washington, Los Angeles and Boston are now decidedly liberal," said Sauter. "On the home screen, the three broadcast network divisions still have their liberal tilt. Two of the three leading cable news sources are unrelentingly liberal in their fear and loathing of President Trump.

For "many journalists," he added, "objectivity, balance and fairness -- once the gold standard of reporting -- are not mandatory in a divided political era...."

"Much of journalism has become the clarion voice of the 'resistance,' dedicated to ousting the president," said Sauter, "even though he was legally elected and, according to the polls, enjoys the support of about 44% of likely 2020 voters."

This "resistance" journalism is popular with left-wingers and the media companies apparently have cast their lot with that audience.

"The media likes what it is doing," said Sauter. "Admires it. Celebrates it. There is no personal, professional or financial reason to change. If anything, the gap will expand. Ultimately, the media finds the 'deplorables' deplorable."

Sauter noted that ABC's Dan Abrams, the founder of the website Mediaite, believes the press should be candid about their politics. At February's Rancho Mirage Writers Festival, said Sauter, Abrams remarked, “I think the first thing that would help . . . is to admit . . . that the people in the media are left of center.”

Sauter concluded his piece, "America won’t reunite until far more people can look at a news story in print or on the screen and, of all things, believe it."