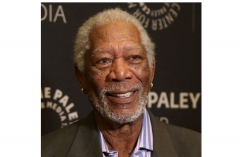 Academy Award-winning actor Morgan Freeman, who endorsed Barack Obama for president in 2008, said that having a Black History Month was “ridiculous” and that the best way to end racism today is to “stop talking about it.”

Freeman, known for his roles in The Shawshank Redemption, Unforgiven, and Million Dollar Baby, made his remarks in a December 2005 interview with Mike Wallace of CBS’ 60 Minutes. In the profile of Freeman, Wallace remarked that the actor/director’s “political views are at times surprising,” and then asked Freeman, “Black History Month, you find?”

When Wallace asked, “Why?” Freeman said, “You’re going to relegate my history to a month?” The exchange continued:

Freeman: What do you do with yours? Which month is white history month? No, come on, tell me.”

Freeman:  “I don't either. I don't want a Black History Month. Black history is American history.”

Freeman: “Jewish guy. I have a lot of – some of my best friends are Jewish. Okay?”