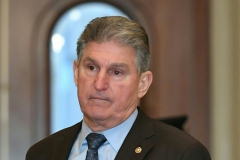 Although left-wing Democrats and their radical supporters in Black Lives Matter and Antifa have called for defunding the police to combat alleged systemic racism, West Virgina Democratic Senator Joe Manchin rejects that idea, and mocked it on Twitter, "Defund the police? Defund, my butt."

In a Nov. 11 interview with the Washington Examiner, parts of which he Tweeted, Sen. Manchin, considered to be a moderate/conservative Democrat, said, "Defund the police? Defund, my butt. I'm a proud West Virginia Democrat."

Defund the police? Defund, my butt. I'm a proud West Virginia Democrat. We are the party of working men and women. We want to protect Americans' jobs & healthcare. We do not have some crazy socialist agenda, and we do not believe in defunding the police. https://t.co/EIFHX5OQ37

"We are the party of working men and women," he said.  "We want to protect Americans' jobs & healthcare."

"We do not have some crazy socialist agenda, and we do not believe in defunding the police," said Manchin.

Earlier this year, Manchin said, "You can't defund the police. That's stupid. It's crazy, and anyone who talks about that is nuts. We just have to make sure our police have the proper education and the proper screening."

"If these reports are accurate, then these proposed 'cuts' to NYPD's budget are a disingenuous illusion," said Ocasio-Cortez.  "This is not a victory. The fight to defund policing continues."