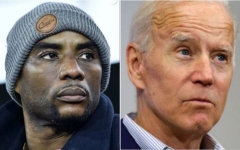 Nationally syndicated radio host Charlamagne tha God criticized Democratic presidential nominee Joe Biden for falsely claiming that Donald Trump is the "first" racist to be elected president and went on to label Biden the "Donkey of the Day."

“I really wish Joe Biden would shut the f**k up forever," said Charlamagne (Lenard McKelvey)  during his Thursday broadcast of The Breakfast Club, reported The New York Post.

On Wednesday, during a virtual town hall, Biden said of Trump, "And what President Trump has done in going—his spreading of racism—the way he deals with people based on the color of their skin, their national origin, where they’re from, is absolutely sickening."

"We’ve had racists and they’ve existed and they’ve tried to get elected president,” said Biden. “He’s the first one that has."

In reaction, Charlamagne tha God said, "I really wish Joe Biden would shut the f**k up forever and continue to act like he's starring in the movie 'A Quiet Place,' because as soon as he opens his mouth and makes noise, he gets us all killed, okay?"

The radio host also accused Biden of engaging in "revisionist history" and lying about Trump.

“How the hell can Donald Trump be the first racist president in a country where 12 presidents before him owned slaves?” said Charlamagne tha God.

In an interview in May, Biden told Charlamagne, "You’ve got more questions? Well, I tell you what, if you have a problem figuring out whether you’re for me or Trump, then you ain’t black.”