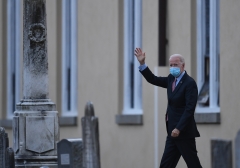 US President-elect Joe Biden waves as he leaves St. Joseph on the Brandywine Roman Catholic Church on January 16, 2021 in Wilmington, Delaware. (Getty Images)

In a commentary explaining why President-elect Joe Biden (D) should not present himself as a serious Catholic and not receive Holy Communion, Irish priest Fr. Patrick McCafferty said that a politician "who supports and lobbies for abortion" is in a state of "grave sin," and should not receive Communion.

He added that Biden "has not repented of his avowed pro-abortion policies," and "has not sought God's forgiveness for them...." Biden "cannot claim to 'take comfort in the Rosary' and stridently advocate for abortion," said Fr. McCafferty. "You cannot serve two masters."

"Mr Biden says he takes 'comfort' in the Catholic faith in the wake of personal tragedies," wrote the priest in the Irish Times. "Faith, however, is not only for comfort. It is not enough to say: 'I have faith.' Our behavior and actions must be in harmony with what we profess with our lips (Matthew 15:8)."

"Hence there are grave difficulties with President-elect Biden receiving the Eucharist, as well as other public figures," said Fr. McCafferty, "here in Ireland and across the world, who profess a form of 'Catholicism' (2 Timothy 3:5)."

The document states, "Regarding the grave sin of abortion or euthanasia, when a person’s formal cooperation becomes manifest (understood, in the case of a Catholic politician, as his consistently campaigning and voting for permissive abortion and euthanasia laws), his Pastor should meet with him, instructing him about the Church’s teaching, informing him that he is not to present himself for Holy Communion until he brings to an end the objective situation of sin, and warning him that he will otherwise be denied the Eucharist."

If the politician does not change and persists in his support of grave sin, i.e., abortion, "the minister of Holy Communion must refuse to distribute it."

Fr. McCafferty also quoted Pope Francis from 2013, "We must adhere to 'Eucharistic coherence', that is, be conscious that they [public figures] cannot receive Holy Communion and at the same time act with deeds or words against the commandments, particularly when abortion, euthanasia and other grave crimes against life and family are encouraged..."

A Catholic politician who supports abortion and then presents himself for Holy Communion "lacks 'coherence' to the point of senselessness," explained the priest. "Furthermore, it is sacrilegious and an abuse of the Sacrament. It gives grave scandal to the faithful. It makes a mockery of the Church's faith in the Holy Eucharist."

Although Joe Biden supports abortion on demand, "gay marriage," gay adoption, and other practices contrary to the moral teachings of the Catholic Church, he regularly attends Mass and receives Holy Communion.  A few priests and bishops over the years have declined to offer him Communion.

The current archbishop of Washington, D.C., Cardinal Wilton Gregory, has said they he will not decline Holy Communion to Biden.

"In a Zoom interview Nov. 24 from the Vatican’s Domus Sanctae Marthae, where he is in quarantine for 10 days as a COVID-19 precaution, the cardinal-designate [Wilton Gregory] said he would not prevent the new president, who goes to Mass every Sunday, from receiving Communion in the archdiocese," reported the Jesuit-run magazine America.