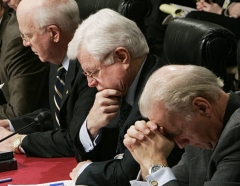 Catholic Bishop Thomas J. Paprocki, head of the Diocese of Springfiled, Ill., said that President Joe Biden "should not present himself" for Holy Communion at Sunday Mass given his decades-long support for abortion and other grievous sins, the Catholic News Agency (CNA) reported.

In the interview, Bishop Paprocki explained that all Catholics, not just Biden, need to seriously examine their conscience before they go up to receive Communion.

“I'm not talking about judging their soul, I'm talking about their external actions," Paprocki told CNA.  "If they're living in a way or holding positions that are contrary to church teaching, then the Minister of Communion has to deny them the sacrament."

For Biden, “The correct first step is that he should not present himself," said the bishop.  "That comes before the question of denying or admitting someone to the sacrament.”

Biden should not present himself for Communion because he has used his power and vote over the years to ensure that abortion occurs in this country (and abroad) and that Planned Parenthood receives federal funding. Abortion and contraception are contrary to Catholic moral teaching.

On Jan. 22, 2021, the 48th anniversary of Roe v. Wade, Biden released a statement that said, "The Biden-Harris Administration is committed to codifying Roe v. Wade and appointing judges that respect foundational precedents like Roe."

US President-elect Joe Biden waves as he leaves St. Joseph on the Brandywine Roman Catholic Church on January 16, 2021 in Wilmington, Delaware. (Getty Images)

Biden also supports myriad other practices contrary to the fundamental moral teaching of the Catholic Church, and which are considered "grave sins." These include, for instance,  gay "marriage," gay adoption, and in vitro fertilization.

Under Canon Law, the law by which the Catholic Church operates, it says that those “who obstinately persist in manifest grave sin are not to be admitted to Holy Communion.”

If that rule is not applied firmly and consistently, said Paprocki, it "gives rise to scandal, in that it leads to the impression that grave sins may not be so grave after all, if there are no consequences for committing them."

In his 1995 letter Evangelium Vitae (The Gospel of Life), Pope St. John Paul II wrote, "Abortion and euthanasia are thus crimes which no human law can claim to legitimize. There is no obligation in conscience to obey such laws; instead there is a grave and clear obligation to oppose them by conscientious objection."

In 2002, then-Cardinal Joseph Ratzinger, who served as Pope Benedict XVI from 2005 to 2013, wrote a "Doctrinal Note on Some Questions Regarding the Participation of Catholics in Political Life."

The note, approved and published by St. Pope John Paul II, repeated that Catholic lawmakers have a "grave and clear obligation" to oppose legalized abortion and other attacks on the right to life. The church said it was "impossible" for a Catholic to promote such laws.

"John Paul II, continuing the constant teaching of the Church, has reiterated many times that those who are directly involved in lawmaking bodies have a grave and clear obligation to oppose any law that attacks human life,” states the Doctrinal Note. “For them, as for every Catholic, it is impossible to promote such laws or to vote for them."

In addition to Joe Biden, Bishop Paprocki said in 2018 that Sen. Dick Durbin (D-Ill.) should not present himself for Holy Communion because of his long-held support for abortion.

Durbin is objectively "cooperating in evil," persisting in "manifest grave sin," and he must therefore "not be admitted to Holy Communion until he repents of his sin," said Paprocki.