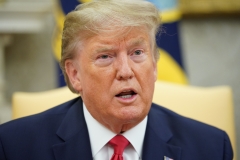 Evangelist and best selling author Anne Graham Lotz, the daughter of the late Pastor Billy Graham, said that God chose Donald Trump to be president at this time in history and that Trump's actions in Syria, whether he realizes it or not, could be putting geopolitical pieces in place that usher in "the last of the Last Days."

"Whether the president is aware of it or not, God has placed him in office," said Lotz on the Oct. 30 edition of The Jim Bakker Show.  "The Bible tells us that [about leaders], that He puts people in office."

"God has used him [Trump] in an amazing way to stand up for life, to stand up for the Nation of Israel, appoint judges that abide by the Constitution and the rule of law," she said. "So, I voted for him in the beginning because the policies of the alternative I couldn’t vote for her [Hillary Clinton]. Then I became a supporter, and I’m almost a fan."

"But this last move, when he’s pulled back from Syria and exposed the Kurds to Turkey, I’m like a lot of people – what in the world is going on?" said Lotz, whose brother is Rev. Franklin Graham.

“But because I believe God has used him, whether he really knows it or not, I believe like King Cyrus or others in the Old Testament, Nebuchadnezzar,  God uses them," she said.  "So, has God caused him to go against all his advisers, all the military people, and done something that God wanted him to do – whether he knows it's God or not, maybe he’s just bullheaded or stubborn or somebody rubbed him wrong?

Lotz continued, "Anyway, he pulled us out. And the thought occurred to me that there is a war prophesied in Ezekiel 38 that has not yet taken place. There is a war that is predicted, that has never happened. When Gog, the prince of Magog—who some people believe is Putin in Russia—they come down from the north and they align with Turkey and Syria and the Sudan and Libya and then they come up and they go against Israel.”

“Ezekiel 38 says, ‘God has done it,’ because He’s bringing them against Jerusalem because He is going to judge them and He’s going to destroy them,” she said. “So I wondered, did God move Trump to move Americans out of the way, freeing up Russia to come down like the Bible says they will?"

"Then a friend who is in the news business sent me a picture of our American base in northern Syria that, the day after we left, was filled with Russian troops and they had moved into our base," said Lotz.  "They are now in northern Syria. So I’m just wondering if it’s like a chess board and if the pieces are being moved to set up maybe the last of the Last Days.”

Anne Graham Lotz, 71, is the author of 12 books, and her most recent is Storming the Gates of Heaven: Prayer that Claims the Promises of God.  She was awarded six honorary degrees. She has three children. Her husband, Dr. Daniel Lotz, died in 2015.