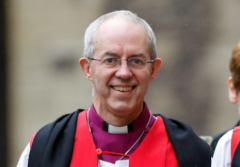 Archbishop of Canterbury Justin Welby, head of the 85-million-strong Anglican church, said that if world leaders do not take real steps to counter global warming, they will be viewed like the lawmakers who ignored the threat posed by Hitler and the Nazis, and this will lead to a genocide greater than that suffered under the Nazis.

The archbishop later apologized for his remark, claiming that, “It’s never right to make comparisons with the atrocities brought by the Nazis.”

Speaking with the BBC, Welby said that history will judge world leaders by how they act in response to the summit. "They could have been brilliant in everything else they've done, and they will be cursed if they don't get this right," he said.

"They could have been rubbish at everything else they've done, but if they get this right, the children of today will rise up and bless them in 50 years," he added.

However, if they fail to take concrete action now, said the archbishop, “People will speak of them in far stronger terms than we speak … of the politicians who ignored what was happening in Nazi Germany because this will kill people all around the world for generations."

Polish born, Sarah Montard, 84, one of the survivors of infamous Vel D'Hiv roundup, shows her Birkenau prisoner identification tattoo as she wears the yellow Jewish star reading in French "Jew", on July 5, 2012 in Tremblay-sur-Mauldre, outside Paris. Montard was arrested on July 16, 1942 and escaped from the Vel d'Hiv before being arrested again on May 24, 1944 and transfered to Birkenau and then Auschwitz. (Getty Images)

“It will allow a genocide on an infinitely greater scale," said Welby. "I’m not sure there’s grades of genocide, but there’s width of genocide, and this will be genocide indirectly, by negligence, recklessness.”

In the late 1930s and throughout World War II, the National Socialists (Nazis) in Germany pursued myriad policies of persecuting Jews (and other perceived enemies), which eventually culminated in their mass extermination, a genocide that killed approximately six million Jews.

After the war, hundreds of thousands of Holocaust survivors fled to Palestine. In 1948, the State of Israel declared independence from Britain.

On Nov. 1, 2021, Archbishop Welby tweeted, "I unequivocally apologise for the words I used when trying to emphasise the gravity of the situation facing us at COP26. It's never right to make comparisons with the atrocities brought by the Nazis, and I'm sorry for the offence caused to Jews by these words."