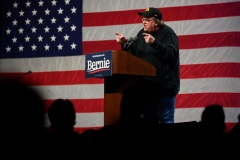 US filmmaker-author-activist Michael Moore, speaks to supporters of Democratic presidential candidate Senator Bernie Sanders at a campaign event in Clive, Iowa, on January 31, 2020. (Photo by JIM WATSON/AFP via Getty Images)

While some are reacting to President Donald Trump’s COVID-19 diagnosis with sympathy for the president and the first lady, others, like filmmaker Michael Moore, have been less than sympathetic.

For instance, Democratic presidential nominee Joe Biden said he and his wife Jill are praying for the health and safety of Trump and his family.

“Jill and I send our thoughts to President Trump and First Lady Melania Trump for a swift recovery. We will continue to pray for the health and safety of the president and his family,” Biden tweeted on Friday.

Moore, meanwhile, said his “thoughts and prayers” are “with Covid-19,” instead of with the president.

“That poor virus got sucked into his body and is now trapped there. How can it escape? He wants to use it as a prop. ‘See this China Flu? I BEAT IT! Just like I’ll beat Biden! They’re both a hoax!’ My thoughts and prayers, too, are with Covid-19,” Moore tweeted.

Moore then speculated that the White House is “lying” about the president’s symptoms being mild, noting that Trump did not send out “a single tweet” even though the president tweeted at the filmmaker hours before finding out he had the coronavirus.

“The lying continues. They claim Trump has only “mild symptoms.” So why hasn’t he sent out a single tweet? Trump tweeted at me (an RT) yesterday, hours before he tweeted he had Covid. Something has to be very, very wrong for there to be no tweets for 15 hours - a record,” Moore tweeted.