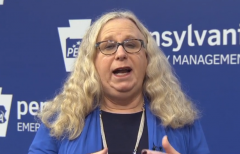 “Dr. Rachel Levine will bring the steady leadership and essential expertise we need to get people through this pandemic — no matter their zip code, race, religion, sexual orientation, gender identity, or disability — and meet the public health needs of our country in this critical moment and beyond,” Biden said in a statement.

“She is a historic and deeply qualified choice to help lead our administration’s health efforts,” the president-elect added.

Levine, a pediatrician and former Pennsylvania physician general, was appointed by Democratic Gov. Tom Wolf in 2017, making Levine one of the few transgender people serving in elected or appointed positions nationwide.

Levine has faces criticism over Levine’s handling of the coronavirus pandemic with some Republican legislators even calling for her to be fired or resign, the Pittsburgh Post-Gazette reports.

If confirmed, Levine would serve under California Attorney General Xavier Becerra, who was nominated last month as HHS secretary.