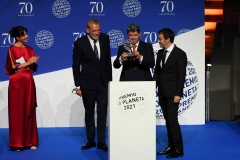 (From 2nd-L) Winners of Spain's 2021 Premio Planeta award Jorge Diaz, Antonio Mercero and Augustin Martinez receive the trophy for their novel "La Bestia", written under the pseudonym Carmen Mola during the ceremony of the 70th edition of the "Premio Planeta" award, in Barcelona on October 15, 2021. (Photo: JOSEP LAGO/AFP via Getty Images)

The only problem? Carmen Mola turned out to be a pseudonym for three male, Spanish television script writers, not a female professor and mother like the world was led to believe.

“Carmen Mola is not, like the lies we’ve been telling, a university professor,” one of the winners announced after winning the prize, the Financial Times wrote. “We are three friends who one day four years ago decided to combine our talent to tell a story.”

Mola’s name became famous for her suspenseful, action-packed stories that featured female protagonists. Her best known trilogy has been translated into 11 languages and is being adapted for television, the Post wrote. 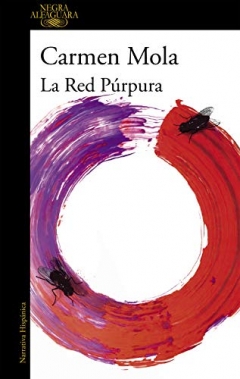 “I don’t know if a female pseudonym would sell more than a male one, I don’t have the faintest idea, but I doubt it,” Mercero told Spain’s El País newspaper. “We didn’t hide behind a woman, we hid behind a name.”

However, due to the literary success of Mola’s persona, others disagreed about the ethics of having men pose behind a female pseudonym.

Last year, a branch of Spain’s Women's Institute listed Mola’s novel The Girl, as one of the must-read books and films by women, which gave its readers perspective into a woman’s reality.

“Quite apart from using a female pseudonym, these guys have spent years doing interviews,” Beatriz Gimeno, a previous head of the Women’s Institute tweeted. “It’s not just the name -- it’s the fake profile that they’ve used to take in readers and journalists. They are scammers.”

The profile for Mola on their agent’s website features a photo of a woman with her back turned to the camera. This was perceived as the author attempting to conceal her identity from readers, the Washington Post found.

“It hasn’t escaped anyone’s notice that the idea of a university professor and mother of three who taught algebra classes in the morning, then wrote ultraviolet, macabre novels in scraps of free time in the afternoon made for a great marketing operation,” Spain’s El Mundo newspaper wrote.