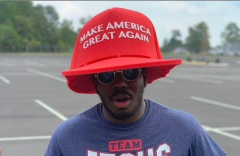 Four songs entitled “Let’s Go Brandon” have reached Apple Music’s Top-10 list this week, with one adaption replacing Adele’s new hit single at the number one spot, according to the Washington Examiner.

The phrase “Let’s go Brandon” originated at a NASCAR race in early October, when a reporter mistook fans’ “F*** Joe Biden” chants as a cheer for the race’s winner, Brandon Brown. The two phrases have now become synonymous, with #LetsGoBrandon trending on Twitter.

The No. 1 song on Apple Music’s Top-10 list this week is “Let’s Go Brandon” by Bryson Gray, with three different editions of Loza Alexander’s version occupying the No. 2, No. 6, and No. 9 spots, reported Pop Vortex.

Gray’s song reached the top of the charts despite its removal from YouTube earlier this week. YouTube cited medical misinformation as the reason for both the lyrics and music video’s removal from its platform.

“YouTube doesn’t allow claims about COVID-19 vaccinations that contradict expert consensus from local health authorities or the World Health Organization,” YouTube wrote in its explanation to Gray for the song’s removal.

The song contains lyrics that question the effectiveness of the COVID-19 vaccine and claim that the pandemic was planned.

Gray told Fox News that he had not heard back from YouTube regarding a re-review of the song, but expressed his frustration to the censorship of his music.

“Why is the most censored rapper in the country someone that doesn’t even curse in songs?” Gray said. “Why can you rap about murder, sex, and drugs, but when I rap about questioning the government I get banned? Is this still America?”