Kelly to Levin: Imagine If the Standard for Jan. 6 Charges Were Applied to Kavanaugh Protest 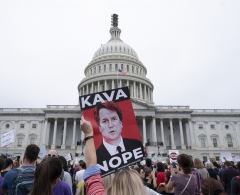 The Department of Justice has issued a felony charge “on at least 200 cases to turn Trump supporters into convicted felons” after the Jan. 6 rally, according to American Greatness senior contributor Julie Kelly told Mark Levin on Thursday's "The Mark Levin Show."

“Just imagine for a minute, Mark, if that would have applied to the 2018 Kavanaugh protests, where they tried to not only shut down a Senate confirmation, but actually were banging on the Supreme Court doors, trying to stop him from being sworn in," Kelly said. "I mean, we would have had thousands of felons in that case."

"We even had two federal judges, Julie, both appointed by Obama, who raised concerns about the way certain people are being charged," Levin noted.

Below is a transcript of The Mark Levin Show:

Mark Levin: “I’m back with Julie Kelly, senior contributor, American Greatness. Julie Kelly has spent more time investigating and actually personally going to the jail, talking to defendants, talking to their lawyers, looking at the charging documents and so forth, than any other person.

“And Philip Bump has done none of it. So if you’re reading the Washington Post, you have no idea what’s going on except Philip Bump’s uninformed propaganda. We even had two federal judges, Julie, both appointed by Obama, who raised concerns about the way certain people are being charged.

“They’ve raised the question like, ‘Wait a minute, you’re charging people for disrupting Congress, when in fact, we’ve had people disrupt Congress, you hit them with a misdemeanor or you let them go. You’re charging these people with felonies if they don’t plead to an offense that you demand.’

“And they’re saying, ‘What is that based on?’ You’ve heard that too, right?”

Julie Kelly: “I have. So you’re referring to Judge [Randolph D.] Moss and Judge [Amit P.] Mehta. Judge Moss called the obstruction of an official proceeding a felony, which the DOJ has slapped on at least 200 cases to turn Trump supporters into convicted felons. It’s never been used in this way before; the judges know it, the government knows it, the defense lawyers certainly know it.

“And so both of those lawyers have raised concerns; Judge Moss said it has the constitutional vagueness problem. There is a motion in the Oathkeepers case, a motion to dismiss and Judge Mehta is considering that now and should make a ruling, should issue some ruling on that next month.

“But again, Philip Bump, do you even know what the obstruction of an official proceeding charge is, its origination, which was a post-Enron law that was supposed to stop any interference in congressional investigation, not the certification of the electoral college?

“So, you know, these are the things that Mr. Bump does not stay awake at night worrying about.”

Levin: “I had a gentleman contact me and this gentleman said 'I have a problem. I was told by the Department of Justice, my lawyer was, either I plead guilty to this federal misdemeanor and agree not to appeal, or I’m going to be charged with a felony' along the lines you just discussed, 'and go to trial and I can’t afford a lawyer. And not only that, I never entered the Capitol building, I was on the Capitol grounds, I didn’t even know I was trespassing.'”

Levin: “And I don’t believe this gentleman is alone, is he?”

Kelly: “He’s certainly not. Like I said, I think there are about 220 defendants who face this felony charge that has been applied to mostly misdemeanor offenses, such as parading or picketing, restricted access, disorderly conduct.

“And so this, you know, just imagine for a minute, Mark, if that would have applied to the 2018 Kavanaugh protests, where they tried to not only shut down a Senate confirmation, but actually were banging on the Supreme Court doors, trying to stop him from being sworn in. I mean, we would have had thousands of felons in that case.

“But it’s never been used that way, only to Jan. 6 defendants, which again, Philip Bump, that doesn’t make them political prisoners or that this is a political prosecution when you have such an egregious double standard of justice.”