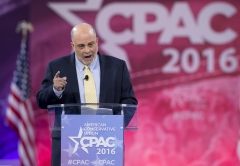 Levin read from the piece authored by Bob Woodward and Carl Bernstein, two investigative journalists famous for their coverage of the Watergate scandal, which will reach its 50th anniversary this year.

"By legal definition," Woodward and Bernstein wrote with with regard to President Trump’s actions surrounding the events on the Capitol on Jan. 6, 2021, "this is clearly sedition — conduct, speech or organizing that incites people to rebel against the governing authority of the state."

"Wow, really?" asked Levin. "That's it? Truly? Well, then I think we need to arrest the Squad immediately. Don't we? I think so. I guess we have to arrest all the reporters during the riots of 2020. Are these guys serious?"

Mark Levin: "'On that day,' they write, 'driven by Trump's rhetoric and his obvious approval.'

"'Driven by Trump's rhetoric and obvious approval'...that is, to be peaceful? 'A mob descended on the Capitol and, in a stunning act of collective violence, broke through doors and windows and ransacked the House chamber, where the electoral votes were to be counted. The mob then went in search of Pence — all to prevent the certification of Joe Biden’s victory. Trump did nothing to restrain them.'

"Trump offered the National Guard beforehand. The issue is: why didn't Pelosi take them? But we all heard what Trump said. He said nothing of the sort. He never said charge the Capitol Building, go get Pence, stop anything.

"'By legal definition,' the two lawyers (not) they write, 'this is clearly sedition — conduct, speech or organizing that incites people to rebel against the governing authority of the state.' Wow, really? That's it? Truly? Well, then I think we need to arrest the Squad immediately. Don't we? I think so. I guess we have to arrest all the reporters during the riots of 2020. Are these guys serious? 'Thus, Trump became the first seditious president in our history.' That's it, two sentences. They have it all figured out. Never too bright, these two. 'Years earlier, Nixon was intent on undermining and subverting' -- folks, the three or 4, I guess it's 400,000 of you who have a copy of 'Unfreedom of the Press,' read it. Read it. You will find what Woodrow Wilson did, you will find what Franklin Roosevelt did, you will find what John Kennedy and Lyndon Johnson did. In his talk about Watergate, was it serious? It was serious enough. But it didn't come close, not even close to what Lyndon Johnson and John Kennedy did. Not even close. But one of Kennedy's best friends was Ben Bradley. And they certainly didn't want Lyndon Johnson to fail, after the Great Society was being implemented -- not even close. And now it's Trump's turn.

"They tried to take out Reagan with Iran-Contra. Now it's Trump's turn, for the 15th time. And they're going to have a special, ABC News, retired president, a documentary -- I would love to know the amount of money that's being spent on this committee. I would love the names of the staff to be released. Who are these former prosecutors? Who are these staffers? I would love to have their texts and their emails and their documents, as well as Pelosi's in communication with members of the committee, then you'd see the real behind the scenes, then you'd really see how Washington D.C. works. There ought to be a committee, all right, investigating Pelosi, the Democrats, Hillary Clinton, the FBI, certain media outlets for what they did to this nation. You want to talk about an insurrection? What the hell do you think Russia collusion was?"

Lucy Collins is a CNSNews intern and a student at Columbia University.