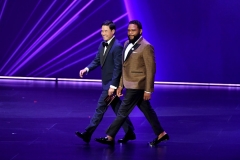 Seen by a record-low audience, this year’s Emmy Awards hosted by talk show host Jimmy Kimmel featured a tribute to Black Lives Matter that some have labeled “cringeworthy” and “awkward.”

“You know we have a record number of Black Emmy nominees this year, which is great… This is the part where the white people start to applaud… and nod,” Anderson instructed Kimmel, who then performed the gestures.

“[The Emmys this year] would have been ‘you fit the description’ black” Anderson goes on, “We would've had speeches quoting our great poets like Maya Angelou, Langston Hughes, Cardi B, WAP, Jimmy WAP.”

The criticism of the performance was in large part due to Kimmel’s seemingly uncomfortable behavior next to Anderson, attempting to interject at times saying, “Well, uh, I’m sorry it wasn’t that. It would’ve been great. It really would—,” and correcting a small fact about an animal featured earlier in the show, to which Anderson responded, “Don’t whitesplain it to me, Jimmy.”

“This is just such a joke at this point,” tweeted Errol Webber, Congressional Candidate for CA-37, “Jimmy Kimmel - a dude who did blackface, did up his whole body ‘black,’ and spoke mockingly in ‘ebonics’ for comedy is now chanting ‘Black Lives Matter.’ Not to mention Anthony Anderson’s cringeworthy rant about ‘whitesplaining.’”

In June of this year, Kimmel apologized for using Blackface to impersonate NBA star Karl Malone in the 1990s, “I never considered that this might be seen as anything other than an imitation of a fellow human being, one that had no more to do with Karl’s skin color than it did his bulging muscles and bald head.”

Some criticized the choice of Anderson, who came under scrutiny following accusations of sexual assault and in the wake of the #MeToo movement.

In 2004, Anderson was charged with aggravated rape but charges were later dropped after a judge ruled there was not sufficient probable cause to try the case. Then, in 2018, Anderson faced sexual misconduct accusations again, but the Los Angeles County District Attorney’s Office decided against prosecuting the case.