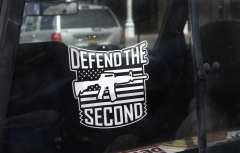 For all his talk of unity, Joe Biden’s proposed gun control measures would make the country “fracture at all of its seams,” conservative pundit Ben Shapiro said on "The Ben Shapiro Show" Wednesday.

Shapiro discussed gun control in light of the recent shooting in Boulder, Colo., citing statements from President Joe Biden, Vice President Kamala Harris, and Press Secretary Jen Psaki to enforce “common sense gun control,“ even at the expense of throwing out the filibuster.

"You want to exacerbate conflict to the point of possible violence? That is the exact way to do it," Shapiro said. Democrats "are not targeting criminals. Right now, they want felons to vote, but they want you, the law-abiding citizen, not to be able to get a gun. This is the Democratic agenda at this point."

Ben Shapiro: You want to exacerbate the country’s national divides? You want to make sure that red states just stop helping out the federal government? You want to make sure that the country starts to fracture at all of its seams? Do exactly what Joe Biden is doing right now and, by the way, do it on the issue of gun control. I mean, if Joe Biden tries to nuke the filibuster in order to cram down federal gun control in complete contravention of the Constitution of the United States, good luck if you think that citizens of Texas or Alabama or Tennessee or Florida are going to sit still and let the federal government tell them what to do with their guns. The federal government is going to have another think coming? You want to exacerbate conflict to the point of possible violence? That is the exact way to do it.

See here’s the thing that the left needs to understand about gun ownership: for people who are not of the far-left in the United States -- it is a fundamental right in the United States to be able to protect yourself, including with guns. The reason to own guns is to stop people from violating your fundamental rights and the first sign that your fundamental rights are about to be violated is when someone comes to your door and demands your guns. Okay, so this is a completely self-defeating proposal. Nonetheless, this is exactly what Biden is apparently pushing for and now he’s talking about nuking the filibuster in order to do all of this stuff. So Jen Psaki announced yesterday that Biden is considering executive action on guns. She apparently said "putting in place common-sense gun safety measures has been a passion of the president since he was in the Senate." By the way, “common sense gun safety measures” -- that is a euphemism for “gun control measures that have no evidentiary backing,” right, like the 1994 assault weapons ban which studies demonstrate did nothing to stop mass shootings or to decline the rate of homocide in the United States. Apparently, according to Jen Psaki, his position on the filibuster has not changed as of yet but we are considering a range of levers including working through legislation including an executive action that has been under discussion, will continue to be under discussion. Joe Biden himself came out and called for gun control yesterday. Of course he did.

Biden: I don’t need to wait another minute, let alone an hour to take common sense steps that will save the lives in the future and to urge my colleagues in the House and Senate to act. We can ban assault weapons and high-capacity magazines in this country once again. I got that done when I was a senator; it passed; it was law for the longest time and it brought down these mass killings. We should do it again.

Shapiro: No, it did not bring down the mass killings; the evidence on that is scanty to nil. Okay and again, watching this incoherent president try to push forward a massive gun grab is pretty impressive stuff. Now, by the way, the first notion that you should have that the government is about to invade your rights is when they tell you they’re not about to invade your rights; when they assure you that they’re not about to come for your wallet, they’re coming for your wallet. And when they assure you that they are not coming for your gun, pretty good time to start buying rifles from Bravo Company Manufacturing before the government tries to make it illegal to do so. So when Vice President Kamala Harris says "don’t worry, you know, they keep saying we’re coming for your guns," yes, because you keep saying you’re coming for our guns; that would be why. I remember when Hillary Clinton said this in 2016. In the 2016 campaign, she was like, "they keep saying that I want to come for your guns; I don’t want to come for your guns; I just want an Australian gun buyback program." Oh, you mean the mandatory gun buyback program in Australia, where they came for the guns, like that? Here’s Kamala Harris saying you don’t need to feel threatened; all we’re going to do is, you know, massive gun legislation.

Kamala Harris: And I believe that it is possible -- it has to be possible that people agree that these slaughters have to stop and this is, again, reject the false choice and stop pushing for sure; stop pushing the false choice that this means everybody’s trying to come after your guns. That is not what we’re talking about.

Shapiro: Then who’s -- and I love that the reporter there -- "yeah, yeah, yeah" -- no but then whose guns you coming after? Whose guns? Like whose? Whose guns? That should be the question, not “what kind of guns?“ Whose guns? Because what I’ve noticed is that you are not targeting criminals. Right now, they want felons to vote, but they want you, the law-abiding citizen, not to be able to get a gun. This is the Democratic agenda at this point.