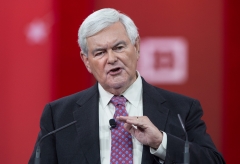 (CNSNews.com) -- Leftist efforts to "unite" the country by penalizing Republicans in the aftermath of the Trump-Biden election are actions of a “totalitarian movement that wants to crush all dissent,” former Speaker of the House Newt Gingrich told conservative host Mark Levin on Fox News' “Life, Liberty, and Levin” on Sunday.

Levin and Gingrich discussed the Democratic attempt “to purify” Congress by damaging reputations of Trump-supporting Republicans in the House and Senate. Specifically, they referenced the growing hostility towards Sens. Josh Hawley (R-MO) and Ted Cruz (R-TX), who voted against certifying the presidential election.

Newt Gingrich: Well, I think it’s exactly what we’ve been talking about: you have a totalitarian movement that wants to crush all dissent, that wants to drive its opponents out of public life, that when it says the word “unity,” it means "surrender;" it means, as you pointed out, conformity, conformity to them, and if you're not prepared to surrender, then you should expect to be punished and to have an effort to drive you from public life. It’s truly an extraordinary moment in American history, but to go a stage further, it also reminds you, if you were to list every Democrat who has said horrifying things about Republicans, incited things about Republicans, starting with [Maxine] Waters -- who went out and said "you should hunt them down at restaurants," "hunt them down in grocery stores" -- I mean, you look at her statement; if that’s not incitement, I have no idea what incitement is. But, I’d go a step further than that. We have to have the courage, and this is a perfect example of the fight for freedom for all of human history. We have to have the courage to stand, look them in the eye, and fight back, and not cave, not give in. If anything, conservatives ought to be praising Cruz and Hawley for having courage, they ought to be praising the House Republicans for having courage, and we ought to get to be as good -- I mean, when Marriot announces it won't give money to Republicans, the Republican National Committee should announce an effort that no Republicans stay at Marriott. Now, it won’t take very many weeks of Republicans cancelling on Marriot before their board of directors is going to say, "you know, maybe this wasn’t a very smart idea." But right now, you live in a country where all the pressure is on the left, the right is passive; it sits there defensively whining, and allows the left -- one last point: You have Swalwell, who has several years a relationship with a woman who is a Chinese spy, based on FBI reports; he is both appointed to the impeachment management group, and he is still back on the Intelligence Committee, and you know, the Republicans ought to be moving to take him off. This is how crazy and how sick their system has become.