Weekend: 60 Shot in Chicago and D.C., Riots, Looting in the Windy City 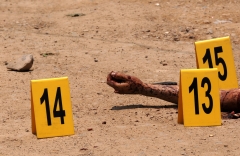 Over the weekend in Chicago, 40 people were shot, four fatally, and riots swept through the city Sunday night. In the District of Columbia, the nation’s capital, 20 people were shot at a block party, including a 17-year-old who was killed.

In Chicago, 3 teenagers were among those shot, including a 15-year-old girl, a 14-year-old boy, and a 17-year old boy, reported the Chicago Sun-Times.

Then, late on Sunday night and into the early morning of August 10, hundreds of people swept through Chicago’s “Mag Mile,” breaking storefront windows and looting, the Chicago Tribune reported. At around 4:30 a.m. on Monday, bridges over the Chicago River were lifted to prevent additional looters from entering the city, according to NBC Chicago.

At least two people involved in the rioting and looting were critically wounded with gunshots, according to the Sun-Times.

At 2:30 p.m. on Sunday in Chicago, police responded to a report of a man with a gun. As police approached, the suspect fled the scene and fired shots at the officers. The police returned fire and the suspect was taken to University of Chicago Medical center, according to the Chicago Tribune.

In Washington, D.C., shots broke out at a large “block party” on Sunday night. Twenty people were wounded and a 17-year-old was killed, according to NBC News.

Metropolitan Police Chief Peter Newsham said at least three shooters are being sought, and emphasized that large gatherings were dangerous during the COVID-19 pandemic.

8.9.20 Chief Newsham provides an update on shooting that occurred in the 3300 block of Dubois Place, SE pic.twitter.com/T2RWNNEHEi

The 17-year-old who was killed, Christopher Brown, was described by the community as “full of energy and quick to smile,” according to USA Today. Brown also had a one-year-old son.