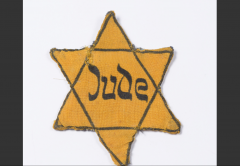 As left-wing radicals topple statues and deface buildings they do not like, someone or a group of people vandalized and partially destroyed a memorial fountain in Santa Rosa, Calif., dedicated to survivors of the Holocaust.

The memorial fountain is located in the cemetery at Santa Rosa Memorial Park, and the vandalism reportedly occurred on June 17-18. The fountain was an important site for the Jewish community, a place where they would perform ritual hand washing after visiting loved ones.

The toppled memorial fountain in the cemetery at the Santa Rosa Memorial Park. (Screenshot, The Press Democrat)

According to the Press Democrat, the fountain was “a memorial created for the late Lillian Judd and her husband Emil, beloved figures in the local Jewish community who survived Nazi concentration camps during World War II.”

Lillian Judd often spoke to students at Sonoma County schools about her WWII experience and the history of the Holocaust, said The Times of Israel.

Santa Rosa Police Sergeant Dave Liscomb said the fountain was pushed off its foundation, and added that anyone who is charged in the case will be charged with felonies due to the extent of the damage.

Moreover, the police department stated that hate crime charges could be filed if the vandalism and destruction is found to have anti-Semitic motives.

“If there is something more to it, we’d go that direction,” Liscomb told the Daily Wire. “But that needs to be vetted out with the investigation when we get a hold of who did this.”