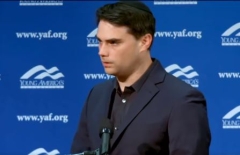 Conservative commentator Ben Shapiro is railing against the Fox News Channel for airing a sympathetic segment highlighting a family that encouraged their young daughter to identify as a boy from the mere age of five, calling the report “despicable,” and “a complete betrayal of anything remotely resembling conservatism or decency.”

In Monday’s episode of “The Ben Shapiro Show,” Shapiro dissects and refutes, piece by piece, the “insane propaganda” of the Fox News segment, “California transgender teen, family hope to be an inspiration to others,” promoting the transition of the young girl.

In particular, Shapiro rejected Fox News Reporter Bryan Llenas' claim that Americans simply don’t “understand” transgender ideology. In fact, they do understand – and that’s why they reject it – Shapiro says in the video:

“What if we do understand your agenda? What if what we are afraid of is the agenda, because the agenda is pure garbage? Because it’s harming children. And, because it’s deliberately promoting propaganda that is based, not on science, but on ideological nonsense that is rooted in opposition to Judeo-Christian values and traditions and mores and rules and roles.

“What if that is what we are concerned about?”

“And, what about if we’re particularly concerned when it starts taking over major American conservative institutions, like Fox News?” Shapiro added.

“Every element of this video is propagandistic, dangerous garbage.” Daily Wire Editor Emeritus Shapiro wrote in a commentary reacting to the Fox News segment, adding that “The report states that this biologically female child was choosing her gender before she could speak.”

“That is madness,” Shapiro writes.

The video from Fox News’ “America’s Newsroom” describes the life of Ryland Whittington, a transgender boy whose parents helped to transition at the age of five years old. This video is part of Fox’s “America Together: LGBTQ+ Pride Month” series.

Shapiro called Ryland’s transition from such a young age “child abuse,” stating that, “the vast majority of children who display signs of gender dysphoria desist over time.”

He called the report “horrifying propaganda,” and ridiculed the mother, Hillary Whittington, for referencing her Christian faith to justify transitioning her daughter as an infant.

“I’d rather have a living son than a dead daughter,” Ryland’s mother told “America’s Newsroom” – a claim Shapiro calls mere propaganda, not fact:

“There is no credible evidence that transition alleviates suicidal ideation among children who identify as LGBTQ+.”

“This is not about the children,” it’s about pushing a harmful ideology, which Fox News is helping to promote, Shapiro said:

“This is about pushing a gender theory that victimizes small children. And this is happening on Fox News, where the family is praised for its ‘extraordinary courage’ in the face of the ‘politicization’ of transgender issues.”

Other prominent conservatives are also speaking out against the Fox video.

Author and Daily Wire Writer Matt Walsh tweeted: “Today Fox ran a long segment for Pride Month celebrating a ‘trans kid’ who ‘came out as a boy’ at the age of five. The piece did not simply report on the controversy surrounding child transitioning. It outright promotes the practice.”

A new documentary video by Walsh addresses the question of “What Is a Woman?”

Allie Beth Stuckey, host of the “Relatable” podcast, tweeted that, she’s grateful that her parents didn’t “transition” her, when she was a child who didn’t like to wear dresses:

“I hated dresses and bows as a child and insisted on only wearing jeans and a white t-shirt. Thank God my parents didn’t see my ‘discomfort’ as a sign that I’m actually supposed to be a boy. ‘Transitioning’ a child is abusive. Let them grow up. Teach them to love their bodies.”

In a commentary for NewsBusters, the Media Research Center’s Tierin-Rose Mandelburg also spoke out against traditionally-conservative Fox News for giving transgender ideology a platform:

“The only thing this story led me to understand is that Fox is a bit more woke than I’d like to admit. Prayers go out to the millions of people that saw this segment and think that transitioning the youth isn’t child abuse.”