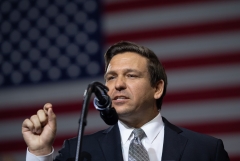 Levin interviewed DeSantis on in-person vs. remote instruction, false narratives of American history that are being taught to children in the education system, as well as forcing children to wear masks in schools. The governor stressed ways to redress these issues:

“So what we’re going to be doing in this upcoming legislative session: we’re going to give parents the ability to go in and get legal relief, if they’re not following our state standards with respect to history and government,” DeSantis said.

Below is a transcript of this portion of the segment:

Mark Levin: “Welcome back, America. Gov. DeSantis, your schools are open, your kids are going to school. You’ve had some battles with some of these local school districts and you've put the hammer down. You’re very focused on the education of the students and the rights of parents, whether it comes to the opening of schools, whether it comes to vaccines and masks and critical race theory. Explain to the American people your mindset when it comes to schooling.”

Gov. Ron DeSantis: “Well, when COVID first hit, one of the most important things for me to determine was ‘what does this mean for our kids and is it something they need to be kept out of school for?’ And after five, six weeks of this, it was pretty clear, based on the data we were seeing in Europe, kids needed to be in school, so we made sure in that 2020 school year we had all the kids in person; we gave parents the option, if they wanted their kid virtual, but the schools had to offer in-person instruction five days a week and that was one of the best decisions we could have made. I think the places that had extended school closures are gonna rue that day for years and years down the line. We also signed into law, earlier in 2021, a parent’s bill of rights, which said parents are in the driver’s seat when it comes to the health, the education, and upbringing of their kids. And so that impacts issues like you can’t force a kid to wear a mask to school and so we stood up with parents for parents’ rights on that. Yes, we’ve been battled on all those; the teachers unions in 2020, they sued me to try to close the schools. We beat the unions on that and then some of the school districts fought us because they wanted to force-mask these young kids and we were able to win those battles and win with parents, but we are also going to do more. So, we did ban critical race theory in our K-12 schools –”

DeSantis: “Well, first of all, we’re not spending taxpayer dollars to teach our kids to hate this country or to hate each other, and that’s what this is; this is political ideology, it’s divisive, and it's quite frankly false history, when you look at like the 1619 Project claiming that the American Revolution was fought over slavery. Really? We have the pamphlets, Mark; you’ve read them. You can see what they were talking about in Lexington and Concord and what they were writing. They were talking about freedom, revolting against executive authority, taxation without representation, so it’s just pure revisionist history, all to drive a political agenda and that political agenda is they want these kids to hate this country, they want them to reject our founding, our institutions, and they want to replace that with their leftist ideology, which would obviously be disastrous for this country’s future. So the stakes are very high on that, but there’s a problem when you can say it, you can’t do it, but what if they defy you, what if they defy you, what if they’re doing it? So what we’re going to be doing in this upcoming legislative session: we’re going to give parents the ability to go in and get legal relief, if they’re not following our state standards with respect to history and government and I think empowering parents to be involved, making sure parents have a right to inspect the curriculum and it’s not just about critical race theory; I mean there’s a lot of other inappropriate content that can be smuggled in by public schools and some parts of the country have it way worse than Florida in that regard. So, parents – this idea of parents don’t have a right to be involved in this -- that is what the left believes. They believe that schools are separate from the family and that really, they should be able to mold the kids however they, the bureaucrats, and the unions want. We obviously believe that it’s the parents and the families that are in the driver’s seat and so we have empowered parents in Florida, but we’re actually going to do more in just the next couple months.”