‘We Are Embracing Sin in the USA, All the Way from the White House on Down,’ Evangelist Jack Brewer Warns 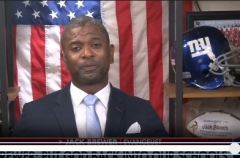 Mass shootings, like the one in Uvalde, Texas, are happening because the nation’s children are being taught to sin and raised without the respect for human life that comes from belief in God, Evangelist Jack Brewer says.

In an appearance on “Fox & Friends First” Thursday, the former NFL safety-turned-evangelist said that a godless upbringing, combined with the influence of media and godless teachers, has left the minds of children – like the Uvalde shooter – confused:

“It is only God at this point. I think we are seeing a generation of children that are godless and don't have a fear of God. So, whenever you start throwing in all the complexities that kids these days face, from the media they consume to the television that they watch, the conversations that they are having now at this age and even what the schools are teaching the children are things that 10, 15, 20 years ago you would have never even thought about taught to children in school.

“So, their minds right now are confused. This child that did this horrible act was confused.”

Children grow up without respect for the lives of others, if they don’t have a relationship with God, Brewer said:

“You have to figure out how to find these children and give them the understanding of a relationship with God. If you don't wake up in the morning and say a prayer or you don't go at night and give thanks, you don't have that humility. You can lose that respect for life. And that is what is happening right now. You see children that don't respect the lives of other people and other human beings.”

“From the White House on down,” America is embracing sin, and even refusing to acknowledge its existence – and, unless we correct course, tragedies like the one in Uvalde will continue to happen, Brewer warned:

“And, right now, we are teaching our children how to sin. We are embracing sin in the United States of America, all the way from our White House on down. And, that is our issue. We don't call sin ‘sin,’ we don’t call iniquity ‘iniquity.’

“But we must learn - because, if we don't, we’re going to continue to see these tragedies.”