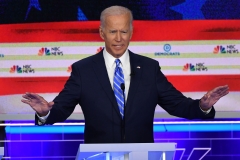 A Washington Post fact-check concludes that President Joe Biden twice told Americans a “whopper” of a falsehood last week when he claimed that Georgia’s new voting reform law ends voting hours early, preventing people from voting after they get off work.

The fact-check examined two Biden claims: one made in his first press conference as president and a similar one he made the next day in a written statement:

“What I’m worried about is how un-American this whole initiative is. It’s sick. It’s sick … deciding that you’re going to end voting at five o’clock when working people are just getting off work.”

— President Biden, in remarks at a news conference, March 25

“Among the outrageous parts of this new state law, it ends voting hours early so working people can’t cast their vote after their shift is over.”

— Biden, in a statement “on the attack on the right to vote in Georgia,” March 26

As The Post reports, Georgia’s voting hours on Election Day are unchanged (7 a.m. – 7 p.m.). So, as long as a voter is in line at a polling station by 7 p.m., he or she can vote. And, while early-voting hours were altered, “the net effect was to expand the opportunities to vote for most Georgians, not limit them.”

The Post’s fact-check concludes that it is simply inexplicable that Biden could call Georgia’s new law an “outrageous” restriction of the opportunity to vote when, in truth, it is actually an expansion:

“One could understand a flub in a news conference. But then this same claim popped up in an official presidential statement. Not a single expert we consulted who has studied the law understood why Biden made this claim, as this was the section of law that expanded early voting for many Georgians.

“Somehow Biden managed to turn that expansion into a restriction aimed at working people, calling it ‘among the outrageous parts’ of the law. There’s no evidence that is the case. The president earns Four Pinocchios.”

The Washington Post fact-check rates false claims on a scale of one to four “Pinocchios.”

Its one-word definition of claims that it gives four Pinocchios: “Whoppers.”