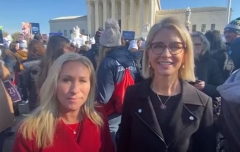 As the Supreme Court heard oral arguments Wednesday in a case that could overturn Roe vs. Wade, Rep. Marjorie Taylor Green (R-GA) and Rep. Marry Miller (R-IL) released a video of their attendance at a pro-life rally outside the court.

‘We’re here to support life and praying that the court will overturn Roe versus Wade today and truly get rid of this awful evil in our land,” Rep. Greene says in the video.

Agreeing, Rep. Miller says that the number of young Americans in the crowd is a promising sign that the nation’s youth are no longer being duped by the lies of anti-life teachers and activists:

“I agree that we’re praying that this will be overturned – but, I have to say how encouraging it is, because we are seeing a change, culturally. You can look around and see all these young people.

”Many of these young people have gone to sonogram appointments with their parents and seen their siblings in the womb. They’ve had the pictures, and they know when they’re told by the left, by their teachers – or whoever is trying to hoodwink them into thinking this is a blob of tissue – that it’s not true.”

“We have to end the lie that the way to solve the problem is by killing the baby in the womb. It never solves the problem – it kills the life,” Rep. Greene says.

“And, destroys the woman in the meantime,” Rep. Miller adds.