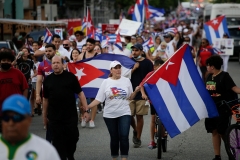 The arrest and mistreatment of clergy members prompted an outcry by religious freedom advocacy groups, such as USCIRF, The Christian Post reports:

“After a surge of protests erupted across the country in response to Cuba’s economic unrest, multiple religious leaders and protesters have been targeted, arrested and beaten.

“Days after multiple pastors have been detained, religious freedom advocates have expressed concern in solidarity for those held against their will and suffering inhuman conditions in detention centers in Cuba.”

“Cuban authorities are detaining religious leaders merely for peacefully protesting and calling for greater respect for human rights,” USCIRF says in a statement calling for the Biden Administration to take action:

USCIRF cites the arrest of two Baptist pastors and detention and assault of a Catholic priest:

“In response to calls for greater freedom and relief from Cuba’s economic and COVID-19 crises, authorities increased their violent crackdown on demonstrators. Those reported as detained include Yeremi Blanco and Yarian Sierra, two pastors from the Berean Baptist Mission in Matanza and Reverend Yusniel Pérez Montejo of the Eastern Baptist Convention.  In addition, authorities reportedly assaulted Father Castor José Álvarez Devesa and detained him incommunicado in Camagüey.”

According to its website, USCIRF is an independent, bipartisan federal government entity established by the U.S. Congress to monitor, analyze, and report on religious freedom abroad and make foreign policy recommendations to the president, the secretary of state, and Congress.