Former Democrat presidential candidate Tulsi Gabbard says Democrats, and some Republicans, need to do their homework, so they’ll remember what “freedom of speech” truly means. 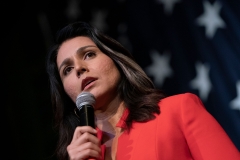 Monday, in a video posted in her Twitter thread, Gabbard calls out Democrats who claim to oppose dictatorships, but don’t speak out against the Department of Homeland Security’s new “Misinformation and Disinformation Governance Board,” which critics have dubbed the Biden Administration’s “Ministry of Truth”:

Democrats who say you're against dictatorships, where are your voices condemning the Ministry of Truth? Even worse are Republicans who say such a propaganda board is needed but it should be headed by someone who's not biased—not Jankowicz. They all need to read the Bill of Rights pic.twitter.com/rDZhFf40VK

“To all the Democrats out there who say, over and over again, about how you stand strong against dictatorships: I’m wondering where your voice is now, condemning this creation of a Ministry of Truth in our own Department of Homeland Security.”

What’s even more troubling is that even some Republicans actually support the creation of such a government “propaganda board,” Gabbard says:

“All of you need to read the Bill of Rights again and be reminded about what our freedom of speech really means and how important it is to us all, Gabbard says.

Continuing her thread, Gabbard provides the text of the First Amendment, for all to see and contemplate:

“Congress shall make no law respecting an establishment of religion, or prohibiting the free exercise thereof; or abridging the freedom of speech, or of the press; or the right of the people peaceably to assemble, and to petition the Government for a redress of grievances.”