Trump’s Veterans Day Video Pays Tribute to the ‘Incredible People’ Who Have Served in the U.S. Military 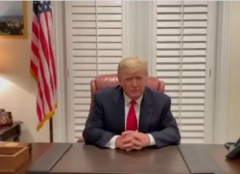 On Thursday, former President Donald Trump released a Veterans Day video, in which he expresses his extreme gratitude to all of those who have served in the U.S. military.

Trump begins by paying tribute to all of the “incredible people” who have served the nation:

"Our Country will be back and will be back stronger than ever. Happy Veterans Day." 🇺🇸 pic.twitter.com/lJ5eTtnZjT

"We love you, our nation respects you, the world respects you – and, we will come back,” Trump promises, noting that America has experience “very, very tough” times of late:

“Our country has gone through a lot. The last period of time has been very, very tough, watching what you had to watch. But, our country will be back and will be back stronger than ever.”

As the Western Journal reports, as Commander-in-Chief, Pres. Trump was an active supporter of the U.S. military. In 2018, he made a surprise visit to troops in Iraq. He issued an executive order streamlining student loan debt-forgiveness for disabled veterans and also signed bills expanding benefits for U.S. service members.