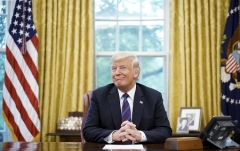 President Donald Trump, often portrayed by liberal media as a racist, has reportedly attracted the highest share of minority voters of any Republican presidential candidate since 1960, when John F. Kennedy defeated Richard Nixon.

Citing data obtained from Edison Research, The Daily Mail reports that Trump’s minority support at the ballot box increased among Blacks, Latinos, and nonwhites as a whole:

“According to surveys conducted by Edison Research, Trump has boosted his share of the black vote to 12 percent nationwide, a four-point jump from his support in 2016.”

“Nationally, preliminary numbers indicated that 26 percent of Trump's voting share came from nonwhite voters — the highest percentage for a GOP presidential candidate since 1960.”

According to a chart posted on Twitter by Republican Strategist Adrian Gray, Nixon received 32% of the nonwhite vote in his 1960 loss to Kennedy.