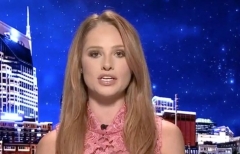 President Joe Biden claims that the Democrats’ $3.5 trillion spending (“reconciliation”) package “costs zero dollars” – but, that’s because “The almighty government pays for nothing; you will pay for it all,” Fox Nation’s Tomi Lahren says.

On Saturday, President Joe Biden claimed that his $3.5 trillion spending plan “costs zero dollars” and “adds zero dollars to the national debt” in a (@POTUS) tweet:

“My Build Back Better Agenda costs zero dollars. Instead of wasting money on tax breaks, loopholes, and tax evasion for big corporations and the wealthy, we can make a once-in-a-generation investment in working America. And it adds zero dollars to the national debt.“

“There’s a basic discussion that needs to happen, or is ongoing — we’re right in the weeds of it now — on what the size of the package looks like.

“But I will also note — and we’ve done this a little bit over the past couple days — but that this package — the reconciliation package would cost zero dollars.”

But, as Tomi Lahren explained Tuesday in an appearance with Fox & Friends First, “This is Sleepy Joe Math: $3.5 trillion equals zero, to Joe Biden.” “This, really, is also Democrat math,” she said:

“This is a socialist starter-pack, as well as a debt bomb. And, the problem is that the Democrats believe that, if the American taxpayer foots the bill, that it really does cost zero dollars.”

“American people, pay attention: the almighty government pays for nothing – you will pay for it all.”

Analysis by National Review reveals that the new and increased taxes intended to pay for the $3.5 trillion spending bill include: