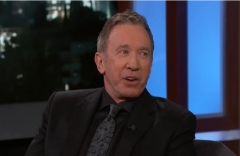 In a press release Monday afternoon, Twitter officially announced that it has entered into “a definitive agreement to be acquired by an entity wholly owned by Elon Musk.”

While many conservatives have cheered the acquisition, expecting the new Twitter management to stop unfairly censoring and suppressing (“shadow banning”) their posts - especially regarding the evolving Hunter Biden laptop scandal - Allen tweeted that he wonders if he’ll be able to post something “even more provocative”:

“The little twitter bird has a new owner. Wonder how long it will take for the new shadow ban council to prevent me from saying stuff like: Hunter Biden laptop. Or even more provocative: Tesla in-car fart app? (Love it when driving my Mom.)”

In a post pinned to the top of his Twitter page, Musk says he opposes censorship of any type of free speech that is legal:

“By ‘free speech’, I simply mean that which matches the law.

“I am against censorship that goes far beyond the law.

“If people want less free speech, they will ask government to pass laws to that effect.

“Therefore, going beyond the law is contrary to the will of the people.”