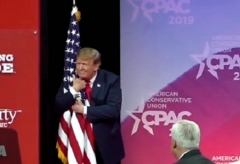 The Taliban committed to honor five conditions stipulated in the agreement it signed with the United States on February 29, 2020 regarding the planned U.S. withdrawal of troops from Afghanistan.

As the Associated Press reported at the time, in the deal struck by President Donald Trump’s State Department, the Taliban promised to oppose terrorist threats to the U.S. and thwart efforts by terrorist groups seeking to establish a safe have in Afghanistan, while the U.S. agreed to withdraw its troops by May of 2021:

“Secretary of State Mike Pompeo witnessed the agreement, which was signed last Saturday in Doha, Qatar, by chief negotiators from the two sides. According to the deal, all 13,000 U.S. troops will leave Afghanistan within 14 months if the Taliban meet their obligations to America. Those promises are tied to fighting terrorism, preventing Afghanistan from becoming a haven for terrorists, denouncing terrorist groups, severing past links with the likes of al-Qaida and helping fight the Islamic State group affiliate.”

In it, the Taliban agrees to five conditions upon which the U.S. troop withdrawal would be predicated:

1.       “Taliban will not allow any of its members, other individuals or groups, including al-Qa’ida, to use the soil of Afghanistan to threaten the security of the United States and its allies.”

3.       “Taliban will prevent any group or individual in Afghanistan from threatening the security of the United States and its allies, and will prevent them from recruiting, training, and fundraising and will not host them in accordance with the commitments in this agreement.”

4.       “Taliban is committed to deal with those seeking asylum or residence in Afghanistan according to international migration law and the commitments of this agreement, so that such persons do not pose a threat to the security of the United States and its allies.”

5.       “Taliban will not provide visas, passports, travel permits, or other legal documents to those who pose a threat to the security of the United States and its allies to enter Afghanistan.”

Three days later, on May 3, 2020, President Trump became what is believed to be the first U.S. president to speak directly with a Taliban leader during a phone call in which both parties reiterated their shared commitment to the agreement, according to an account by The Associated Press:

On Tuesday, Trump said that President Joe Biden’s withdrawal from Afghanistan will go down as one of the most disastrous evacuations in world history:

“What took place yesterday in Afghanistan made our withdrawal from Vietnam look like child’s play. Perhaps in World history, there has never been a withdrawal operation that has been handled so disastrously. A President who has been illegitimately elected has brought great shame, in many ways, to our Country!”