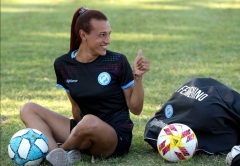 “The results, published last month in the British Journal of Sports Medicine, could mean the current one-year waiting period for Olympic athletes who are transitioning is inadequate,” NBC reported on Tuesday:

“For the Olympic level, the elite level, I'd say probably two years is more realistic than one year,” said the study's lead author, Dr. Timothy Roberts, a pediatrician and the director of the adolescent medicine training program at Children's Mercy Hospital in Kansas City, Missouri. “At one year, the trans women on average still have an advantage over the cis women," he said, referring to cisgender, or nontransgender, women.

The study reports that it “reviewed fitness test results and medical records of 29 transmen and 46 transwomen who started gender affirming hormones while in the United States Air Force.”

Compared to biological females, the study finds that:

Idaho was the first state in the nation to pass such a law, the Fairness in Women’s Sports Act, which was signed into law by Republican Gov. Brad Little – but, the law is blocked from taking effect as a challenge to it is being considered by the 9th U.S. Circuit Court of Appeals.

Other states considering legislation banning transgender athletes from using the claim of “gender identity” to choose whether they want to compete in school sports against either biological females or biological males include: