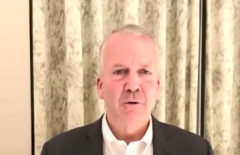 “Get your boot off the neck of American energy producers” because you’re committing “national security suicide,” Sen. Dan Sullivan (R-AK) tells President Joe Biden in a video responding to the president’s speech Thursday regarding the crisis caused by Russia’s invasion of Ukraine.

“That’s not true, Mr. President,” Sen. Sullivan says, refuting Biden’s claim that he’s doing everything in his power to make America energy-independent and ensure U.S energy prices are not skyrocketing because of the crisis in Ukraine.

“Mr. President, you need to do much more. You need to get your boot off the neck of American energy producers.

“You need to approve the Keystone pipeline, but not approve Nord Stream 2. I’m glad you finally saw the light on Nord Stream 2. You need to make sure permitting is going forward – and stop the litigation shutting down federal leases on federal lands for oil and gas and, of course, move forward on Anwar, not try to shut it down.”

“You need to ensure critical minerals that we have in this country are utilized for our national security, for our economy, not shut things down and delay them, as you did recently in Alaska with the Ambler Road.”

With America, its allies and the world counting on him during this crisis, the president needs to stop committing “national security suicide” through his anti-energy policies, Sen. Sullivan says:

“Mr. President, we have enormous energy potential. We are the world’s energy superpower.

“Unilaterally getting rid of our ability to produce energy, whether in Alaska or throughout the rest of the country is national security suicide.

“You need to turn that around, sir, ASAP. The country, and even the world and our allies are depending on you.”