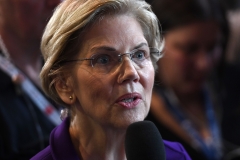 Sen. Elizabeth (D-Mass.) is calling on the Justice Department (DOJ) to investigate Big Poultry because consumer costs are up and “Americans are paying record high prices for their Thanksgiving turkey.”

On Tuesday, Sen. Warren sent a letter to DOJ’s Assistant Attorney General of the Antitrust Division, Jonathan Kanter, calling for an investigation of major poultry companies and accusing them of, among other things, “plain old-corporate greed”:

“I am writing regarding increasing prices paid by consumers for chicken, turkey, and other poultry products as a result of excessive consolidation, price fixing, vertical integration, and plain-old corporate greed.”

“The heavily concentrated poultry industry, in which the top four companies (Tyson Foods, Inc. (Tyson), Pilgrim’s Pride, Perdue, and Sanderson Farms) control over half of the market, has seen disproportionate price increases this year.”

The senator urges the DOJ to launch “a broad investigation” into poultry practices and sets a deadline of December 20, 2021 for the Justice Department to respond:

“Given the apparent connection between rising poultry prices for consumers and the history of anticompetitive practices in the poultry industry, I ask that you open a broad investigation into the impact of price fixing, wage fixing, and consolidation in the poultry industry on consumers and farmers. Specifically, I request answers to the following questions by December 20, 2021.”