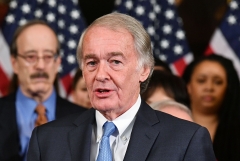 On Monday, Sen. Ed Markey (D-Mass.) said that interpreting the U.S. Constitution as it was originally written and intended (“originalism”) is racist, sexist and homophobic.

“As Judge Barrett described so-called originalism, it means she is supposed to interpret the Constitution's text and understand it to have the meaning it had when the Constitution was ratified.

Markey said that interpreting the text of the Constitution literally, as Justice Barrett has espoused, would threaten the rights of the LGBTQ community by taking America “back in time”:

“For originalists like Judge Barrett, LGBT stands for 'let's go back in time.' A time when you couldn't marry who you love, when you couldn't serve in the military if you were trans, a time when rights were not extended to gay, lesbian, bisexual, transgender, queer, questioning, or intersex individuals. Originalism is just a fancy word for discrimination. It has become a hazy smoke screen for judicial activism by so-called conservatives to achieve from the bench what they cannot accomplish through the ballot box.”