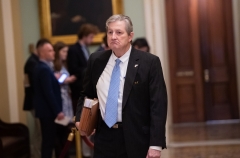 Americans simply cannot afford the price increases on items, such as gasoline and groceries, caused by the Biden Administration, Sen. Kennedy said in an address on the Senate floor:

And, as temperatures continue to drop – and the price of natural gas increasing up to 30 percent – it’s going to get harder and harder for Americans to afford the cost of heating their homes, Kennedy said.

“Ask them if their income went up 30 percent,” Sen. Kennedy said:

“Unfortunately for Americans in my state and in your state and across the county, here with winter coming on, the cost of heating homes is also going up – just in time for temperatures to fall.

“So, the cost of heating is going up and the temperatures are going down.

A lot of families are going to have to shell out up to 30 percent more for natural gas than they did this past year.

“Ask them if their income went up 30 percent.”