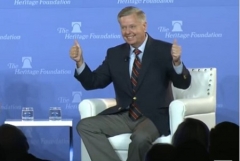 “If you’re a young girl in Pakistan, life is pretty tough,” Sen. Lindsey Graham (R-S.C.) said Tuesday in defense of the $10 million allocated to Pakistani “gender programs” in the COVID-19 relief bill passed by Congress Monday.

The bill, which includes both a $900 billion COVID-19 relief package and a $1.4 trillion omnibus spending agreement, earmarks $25 million for Pakistan - $10 million for “gender programs” and $15 million for “democracy programs” on page 1486).

Appearing on Fox News on Tuesday, Sen. Graham was asked if he was disappointed that much of the spending in the budget and relief bill “has nothing to do with the pandemic or America.”

“Yeah,”  there are some unnecessary spending items, but “Pakistan is a place I really worry about,” especially regarding the rights of women, Sen. Graham said:

“The foreign aid budget is one percent of all American spending. Pakistan is a place I really worry about. Eighty-five countries, a woman can’t open up a bank account without her husband’s signature. She can’t inherit property.”

“If you’re a young girl in Pakistan, life is pretty tough,” Sen Graham said. “So, we’re trying to make life better for women throughout the world. But, one percent of all federal spending is foreign assistance.”

“I like the COVID package, because it is targeted,” the senator added. Still, he called the deal unavoidable “sausage-making” because Democrats control the House:

“So, this is sausage-making – but, the Democrats have a say. They run the House. And, if they ever get the House, the Senate and the White House, it will be a financial disaster for the country.”