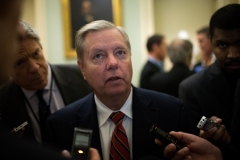 Is it an act of incitement to publicly call senators “co-conspirators” in an insurrection, simply because of how they vote, Sen. Lindsey Grahame (R-SC) asked Thursday, responding to an accusation by former senator and Sec. of State Hillary Clinton.

Clinton said senators are “co-conspirators” if they vote to acquit former President Donald Trump on the charge of using a speech to incite a violent insurrection. Clinton made the claim in a tweet she posted on Wednesday, the second day of Trump’s Senate trial:

"If Senate Republicans fail to convict Donald Trump, it won't be because the facts were with him or his lawyers mounted a competent defense. It will be because the jury includes his co-conspirators."

Graham responded with a tweet asking if Clinton’s words are grounds for impeachment – or if they’re just “rantings of an out-of-control partisan”:

“Is accusing a member of the Senate who votes for acquittal of being a co-conspirator to the violent takeover of the Capitol an act of incitement subject to impeachment?

“Or just the rantings of an out-of-control partisan?

“After this trial, who knows.”

If impeached, Clinton – like Trump – would be impeached after leaving office, which several legal experts, such as iconic civil rights attorney Alan Dershowitz, say is unconstitutional.

“The not-guilty vote is growing,” Sen. Graham revealed in an interview on Thursday:

“The 'Not Guilty' vote is growing after today. I think most Republicans found the presentation by the House Managers offensive and absurd.”