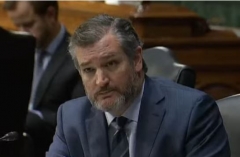 Russian President Vladimir Putin couldn’t afford to invade Ukraine in the past because he couldn’t risk damaging the pipelines he needed to sell his oil and natural gas to Europe – until he built a pipeline to skip Ukraine, Senator Ted Cruz (R-Texas) said in a recent interview.

“Putin didn’t wake up yesterday and decide he wanted to invade Ukraine. He’s wanted to invade Ukraine for decades,” Sen. Cruz explained in an appearance on “Spicer & Co” on March 9, in which he detailed how the Trump Administration’s sanctions on Putin’s Nord Stream 2 pipeline had prevented the invasion – until President Joe Biden lifted them.

Putin couldn’t risk destroying pipelines running through Ukraine that Russia needed to deliver and sell its oil and natural gas to Russia, until it built a pipeline to circumvent Ukraine, Sen. Cruz said, recalling Russia’s 2014 invasion of Crimea:

“He invaded Ukraine; he invaded Crimea, the southern part of Ukraine. But, he didn’t invade the entire country – why?

“Because Russia’s major source of revenue is selling oil and natural gas. And, the natural gas runs in pipelines that run right through the middle of Ukraine. And, if he invaded Ukraine, he’d risk damaging or destroying those pipelines, which would mean he couldn’t get his gas to Europe. So, he stopped.

“The next year, 2015, Putin began building Nord Stream 2. Nord Stream 2 is an undersea pipeline that goes directly from Russia to Germany. And, it skips Ukraine; it goes around Ukraine.

“The reason Putin was building Nord Stream 2 was so that he could invade Ukraine. Because, once that pipeline went online, he could get his gas to Europe and not worry about the tanks rolling in on Ukraine.”

“For over a year, the pipeline was dead, Putin didn’t invade Ukraine.

“Biden formally waived the sanctions a few months later – basically, giving Putin this pipeline and giving him a green light invitation to invade.”