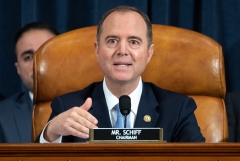 Outraged at the motion to dismiss, House Intel Committee Chair Schiff declared in a Twitter post that “His (Flynn’s) lies do not become truths” and “This dismissal does not exonerate him” Schiff even went so far as to claim that the dismissal “does incriminate” Attorney General William Barr.

In response, Powell told Fox Business Channel Host Lou Dobbs that Schiff is utterly incapable of recognizing even the most glaring truth:

“Mr. Schiff wouldn’t know the truth if it poked him in one of his bug eyes, because Gen. Flynn’s plea was neither knowing nor voluntary — and both those things are required for a guilty plea in the United States of America.”

“He is obviously an extremely disturbed and deceitful person,” Powell added. “We sought the truth from the very beginning of my appearance in Gen. Flynn’s case. That is what we are getting.”

Powell called the motion to dismiss the Flynn case “a huge step in the right direction” for the system of justice in America:

“I’m sure there’s still more to be revealed, but we have made a huge step in the right direction thanks to the real lawyers and agents in the Department of Justice who speak truth and not convictions.”