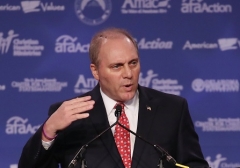 When Democrats’ efforts to defund the nation’s border patrol are rejected by the American people, the White House will try to create a scapegoat, just as it did when Democrats’ “defund the police” push became unpopular, House Minority Whip Steve Scalise (R-LA) predicts.

In an interview on Fox & Friends on Wednesday, Scalise addressed Democrat proposals to cut a billion dollars from the U.S. Customs and Border Patrol (CBP) budget and defund U.S. Immigration and Customs Enforcement (ICE):

“It's really bizarre. It's their priority. They want open borders. Look, you look over the weekend. You had the White House trying to blame other people for defunding the police, which is a crazy idea that they embraced.

“Now, they're trying to defund our border patrol. When that goes south, they're going to blame somebody else for that too. They're the ones doing it.”

“They can blame everybody they want. It proves that their policies are failing,” Rep. Scalise said. “But, in the end, they're doing this deliberately.”

What’s more, Democrats know the disastrous consequences of their policies – but, they don’t care, because they just want to register more voters, Scalise said:

“You can go down to the Donna Detention Facility and see these places overrun with people here illegally. They don't know what to do with them. They're sending them to states all around the nation – and they won't even be honest with us or the American people about where they're going, which states they're sending them to. I mean, local school systems are going to be getting kids by the hundreds that can't speak English.

"And they don't care about those consequences, because they just want to register everybody to vote.”