Russia: 'Sanctions Will Not Solve Anything'

Russia is accustomed to being sanctioned and won’t end its aggression in Ukraine because of any new sanctions enacted by U.S. President Joe Biden, Russia’s ambassador to the United States, Anatoly Antonov, says. 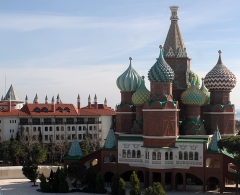 "Sanctions will not solve anything regarding Russia," Russia’s ambassador to the United States, Anatoly Antonov, says.

“History doesn't teach everyone far (sic),” Antonov said Tuesday, in a response to a reporter’s question Antonov posted on the official Facebook page of the Embassy of Russia in the U.S., calling it incredulous that any U.S. politician in the Nation’s Capital actually believes that sanctions will stop Russia from seizing regions of Ukraine.

“History doesn't teach everyone far (sic). Sanctions will not solve anything regarding Russia. It's hard to imagine that anyone in Washington is counting on Russia to review its foreign policy course under threat of restrictions,” Antonov writes. “Something I can't recall a single day when our country lived without any restrictions from the Western world. We learned to work in such conditions. And not only survive, but also develop your (sic) state.”

Ultimately, ordinary American citizens are the ones who will be hurt by the inflation resulting from the sanctions, Antonov warns:

“There is no doubt that the sanctions imposed against us will hurt the global financial and energy markets. They won't end up in the United States, where ordinary citizens will feel all the consequences of price rise.”

In a post on Wednesday, Antonov chided the “obvious futility” of the sanctions and accused the U.S. of resorting to “blackmail, intimidation and threats.”