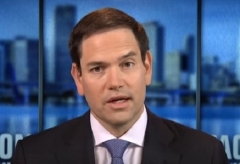 “They have an internal party problem. They have these radical leftwing nutcases who want it to be $7 trillion, not $3.5 trillion, and they think $3.5 trillion is a compromise,” Rubio said in an interview with “Fox and Friends.”

These far-left Democrats are being hindered by their colleagues who hold a “more normal” view of government’s roles, Rubio said:

“And, then, you have a handful of people that haven't gone Marxist yet, who aren't necessarily conservatives or anything of that nature, but are sort of more normal in their view of what government's role in our country should be and they are pushing back. And, so you’ve got this internal fight going on and that's a big problem they have on their hands.

“Look, Joe Biden doesn't have a base. Right? Joe Biden wasn't elected because he's Joe Biden. He was elected as a vessel, right? He's there, because he became sort of an instrument for the far left that now dominates the Democratic Party to pursue their agenda. And, that’s what they’re doing here.”

But, Democrats’ radical leftwing members are acting as if their House and Senate majorities are so large that they can do whatever they want, an attitude moderate Democrats running for reelection can’t afford to adopt, Rubio said:

“These guys are acting like they have a 60-70 vote majority in the Senate and 50 vote majority in the House and that they were elected with some sort of mandate to remake America into a socialist, almost Marxist, type economy. And so, I think that's the pushback you're seeing from people that have to go back home in November and get re-elected. They know they can't run on this.”