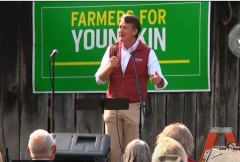 “Freedom is not free. And sometimes we forget to say thank you," Gov. Youngkin explained in an interview with Fox News Channel’s "The Story."

"So I made a commitment when I was running and elected and when we started this administration to make Virginia the most military-and veteran-friendly state in America. And we have consistently been working at that," Youngkin told Host Martha McCallum.

Youngkin joins the ranks of philanthropic politicians, such as Former President Donald Trump, who have contributed portions of their salaries to charitable causes.